We have updated ElectricalOM to version 2018.06.12.01. In this version we have made lots of improvements and we implemented new features based on users' requests and feedback.

Some of the features of the new version are listed below: 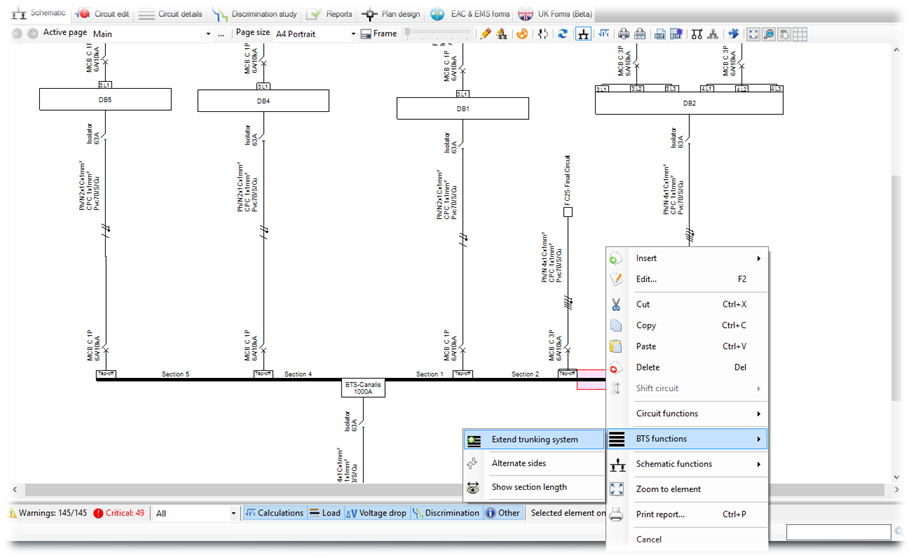 This option will enable the user to overwrite the phase conductor current carrying capacity (It). Please use this option with caution and only when specific cable ratings are provided by manufactures' data. Also a simple warning will be displayed to indicate this selection. 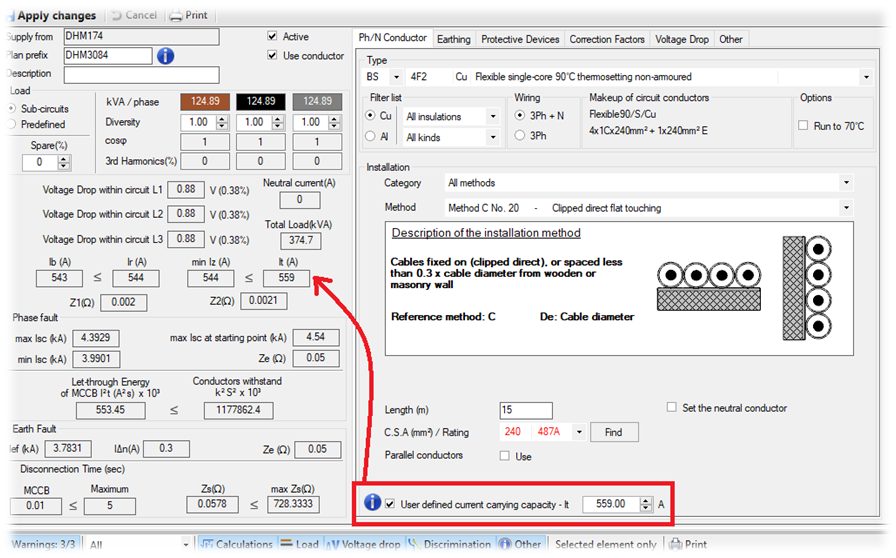 In particular for the parallel assembly modeling of N fuses we are considering the following calculations:

This setting can be defined during the protective device selection. It is highly recommended to get advice from the manufacturer's specifications when applying this setting. 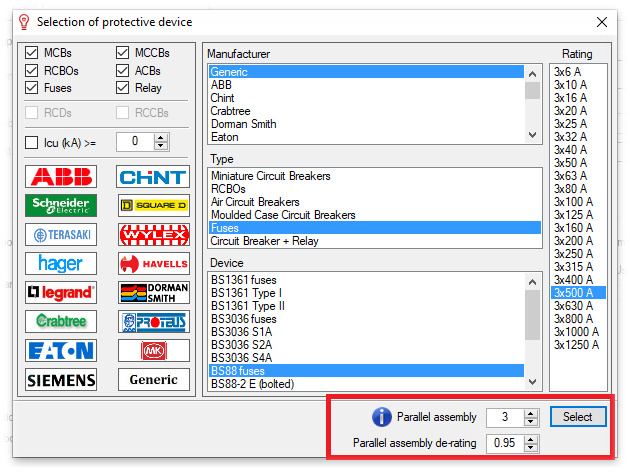 In the new version we included the option for setting a transformer connection as Centre Tap Earth (CTE). CTE systems are commonly used for site safety portable tools. The centre tap splits the winding into 2 sides, each having only the half of the secondary voltage with respect to earth. 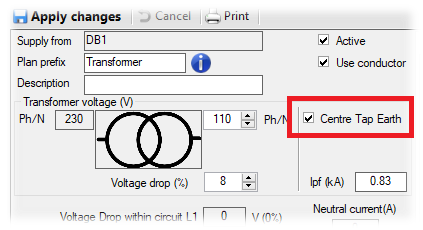 5. RCD as additional protection only

In TN earthing systems it is considered as good proctice to perform validations of the maximum earth fault loop impedances based on the overcurrent protective device and not "rely" on the RCD operation, which in this case is considered as a additional protection equipment only. This option is now available and can be selected by checking the "RCD devices are used only for additional protection" option in the circuit editor at the circuit protective devices tab page. 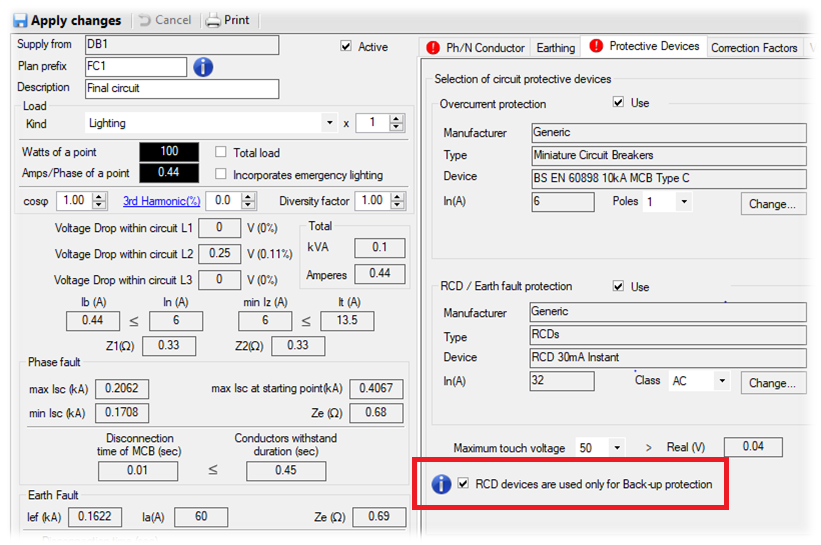 The user can now define the number of cores that will be used as the circuit protective conductor (CPC) in a multi-core cable. 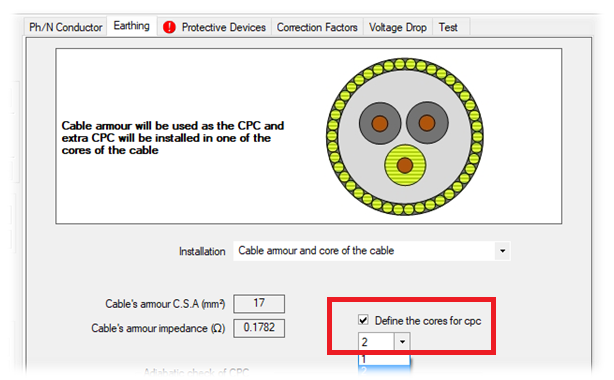 Lighting circuits can now be selected to include a check for emergency lights. This will include an extra core in the cable, to accommodate the emergency lighting requirements.

In the new version we included new circuit types in the load kind list:

The Grid option (1) can be enabled to help with moving the schematic elements based on a grid distance margin (3), defined in the palletes option (2). The color of the grid line can be defined in the palette options at the colors tab page. 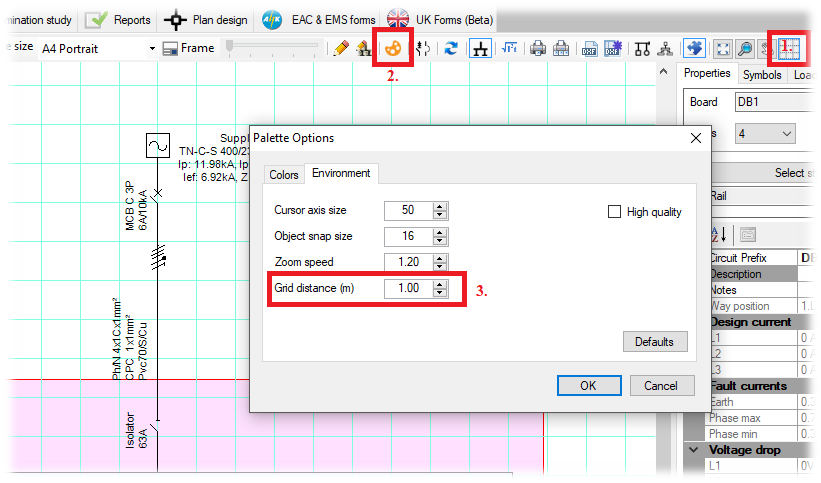 In the new version we included 3 new reports:

This functionality allows the user to create templates of the reports selections. This will enable fast and easy selections of the desired reports to be included in the generated print out. 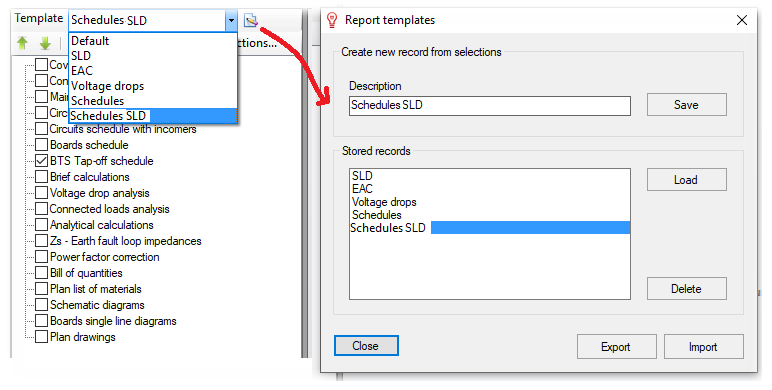 The user can now choose the show/hide the layers of the selected Xref drawing. 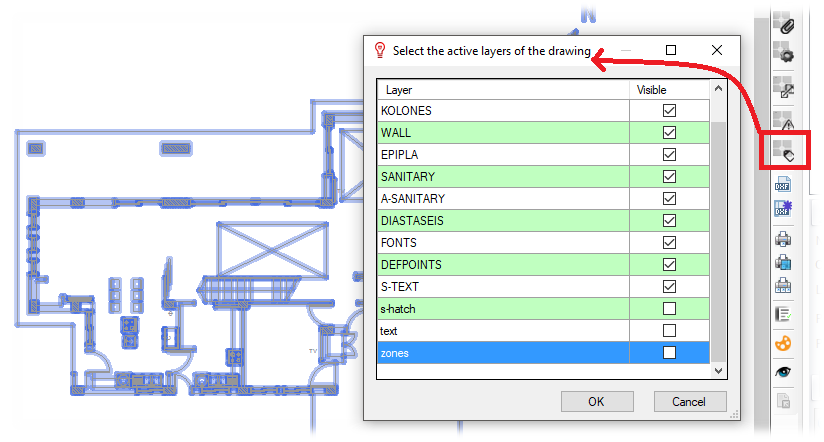 In the new version we included new protective devices from several manufacturers.

I love the software and am very happy that I proceeded with its purchase. It has made our work so much more detailed, exact and believe it or not, enjoyable!

This software is excellent, very stable when operating and implementing changes, and is improving all the time.

I taught myself to use Modecsoft ElectricalOM in an afternoon well enough to knock out a 5 board design with full discrimination studies. To say i am impressed is an understatement!

Thanks for your helpful support. We have the impression that Modecsoft is able to respond to user requests to add new features and device data more quickly than other software vendors

Thanks for all the hard work you are doing in developing this EXCELLENT electrical design software program. I am sure it will fast become the “go too package” for a lot of electrical contractors in the UK.

Many thanks for the excellent program and the customer service!

We think this is a great product and are now relying on it for much of our work. The ability to change parameters in the design and show them immediately if the design will work (or not) is invaluable. Thank you for a great product, keep up the good work.

Using ElectricalOM not only ensures that you have met the requirements for BS 7671, but it also helps to ensure your business is efficient, productive and above all, technically correct.

ElectricalOM is much more than a piece of electrical design software. This BIM-ready solution contains current (and accurate) data from numerous manufacturers ensuring that the golden thread of information is maintained throughout the entire process. The UK forms add-on provides contractors with the ability to produce and pre-populate elements of electrical paperwork. For designers, the high quality of reports that can be generated using ElectricalOM simply enhances your offering to clients. In one word, excellent!